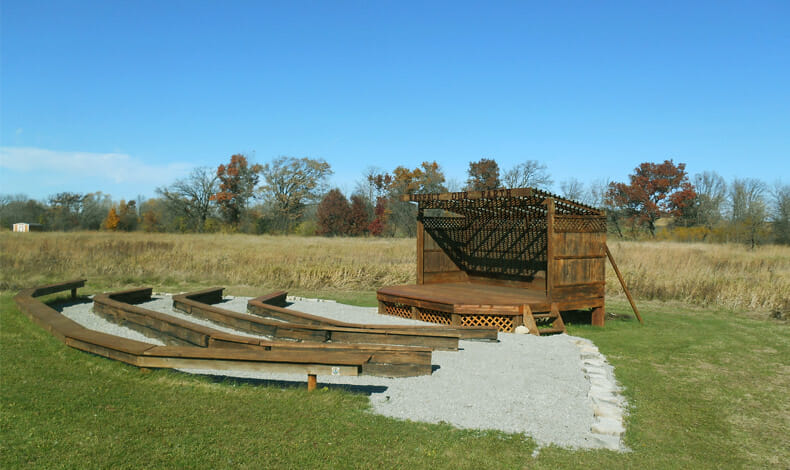 MARSH HAVEN NATURE CENTER is a non-profit, private organization with a rich history of dedicated volunteers and a vision for nature education and enjoyment. In April of 1984, Lawrence Vine, a Wildlife Research Technician for the Wisconsin Department of Natural Resources, invited a small group of people to a meeting around his kitchen table. They began to discuss the possibility of designing and building a modern nature center at Horicon Marsh. These volunteers were enthusiastic and with less than ten cents to their name, this project was off and running.

Mr. Vine felt it was very important to begin writing and publishing a quarterly newsletter to let supporters know how this big project was progressing.  In the fall of 1984, he knew that professional help was needed to design and print the first issue of the Marsh Haven Monarch.  So, he drove to Master Print Company in Beaver Dam for some sound advice.  It was there that Lawrence Vine met Sandra Sutton, a graphic artist and professional printer.  She had many great ideas and the very first issue was a stunning success.

The newsletter and Sandra both became an integral part of Marsh Haven’s success and Lawrence and Sandra were married in 1985!  Sandra helped with so many small and large projects including helping to design the layout of the Main Building, running fund-raising events, and setting up and operating the Gift Shop for many years.  She donated many thousands of hours of hard work to make Marsh Haven so nice.  Even though she has moved away from the area, she still continues to prepare and print the Marsh Haven Monarch today.

The grassroots group began their work by presenting wildlife programs in local schools, conducting small fund-raising events, spending many weekends getting the message out to people, and taking care of injured and orphaned hawks and owls. In 1985, Marsh Haven was recognized as an official 501(c)(3), and two years later the 46-acre building site was purchased. This land is on the northwest corner of Horicon Marsh, bordering the Horicon Marsh National Wildlife Refuge along Highway 49, just east of Waupun.

With the help of numerous volunteers and local school classes, a series of nature trails were designed and built through the woods, around the wetlands, and in the established prairie areas. A 30-foot, two-level observation tower, the only tower on Horicon Marsh, was built in 1988. An overnight bunkhouse was built in 1990, and is used by visiting scouting groups, 4-H clubs, and school groups.

The 8,000 square-foot main building was opened to the public in 1992, and features museum-quality displays and exhibits, a theater, gift shop, classroom, offices, library and restrooms. The volunteers continued to show tremendous dedication to the project by contributing funds, material, and labor to make this building a reality. In 1993, Marsh Haven began tracking all of the hours that the volunteers were donating, and as of spring 2017, we have reached 100,000 hours that have been recorded.

The goal at Marsh Haven is to provide quality hands-on environmental education to children and adults, individuals and organizations. With ideal indoor and outdoor facilities, Marsh Haven is able to provide programs lead by the resident naturalist, or offer opportunities for self-guided programs. School groups, homeschool families, scouting groups and other organizations and individuals visit Marsh Haven for educational programs, family-friendly events, campouts, and other special programs throughout the season.

Made in Wisco by Dirigible